The meaning and definition of mentorship, mentor and mentee

Different people assign different meanings to the word “mentorship”, “mentors” and “mentees”. At MentorCruise, a mentorship platform with a thriving community of mentors and mentees, our members can often get into heated discussions on the semantics behind these terms.

In this article, we’ll reconcile these differences by focusing on the fundamental elements that define the terms mentorship, mentors and mentees.

Meaning and definition of mentor

But even this definition of mentor has come a long way from its origin. As a term, mentorship comes from mentor.

Not convinced? According to Google Ngram Viewer, which analyzes the frequency of various terms from 1500 to the present day, the term mentorship first appeared in in the 1780s: 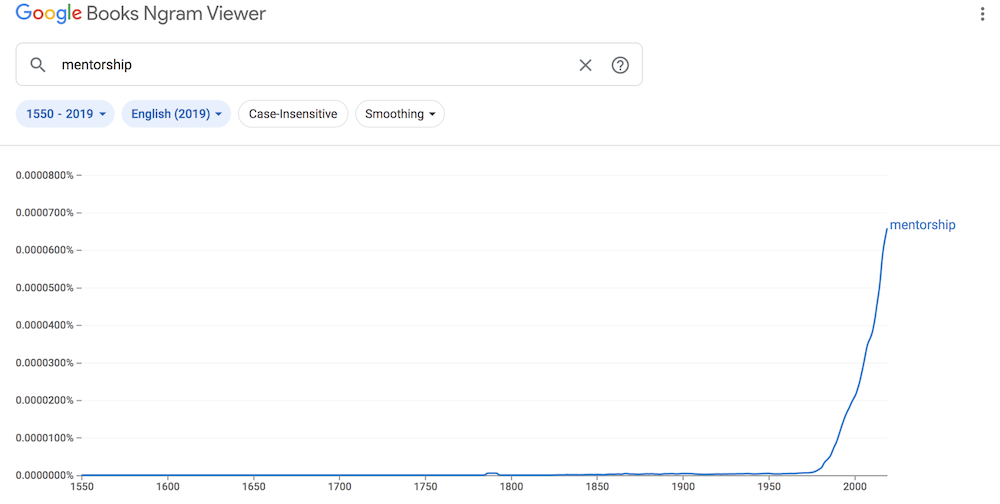 But the term mentor appeared even earlier… in the 1580s! 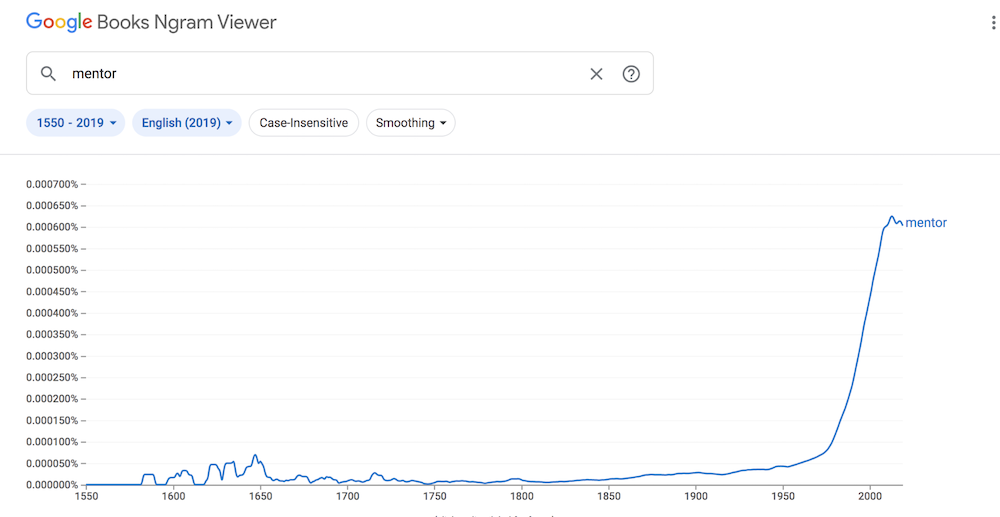 As a bit of context, Gutenberg printed the first-ever book using the printing press in 1455.

The historical origins of mentor date back to Ancient Greece and come from Homer’s epic, the Odyssey. While the legendary king Odysseus was away to lead his army in the 10-year Trojan War, Mentor, his trusted advisor, was left in charge of the household and to guide Telemachus, the king’s son, toward adulthood.

But Mentor failed to live up to his responsibilities. Several noblemen started lusting over Penelope, Odysseus’s wife, and urged her to marry one of them during his 10-year absence. This meant that Telemachus would have been stripped of his birthright to rule.

Across the years, Mentor failed to provide adequate mentorship and guidance to young Telemachus, who, frankly, grew up to be indecisive and cowardly.

Fortunately, the goddess of wisdom, Athena, came to the rescue, took the form of a wise version of Mentor, and guided Telemachus to his father. After a series of trials and tribulations, they returned to Ithaca, and Telemachus killed all his mother’s suitors. Happy ever after, right?

Mentorship includes a “mentor” - an experienced individual - who is meant to guide a “mentee” - a less experienced person. In the Greek epic, Telemachus assumed the role of the mentee, who was under the tutelage of Athena disguised as Mentor.

When talking about mentorship in practice, there are many types of mentorships that we have written an article on. But here are two of the most prevalent ones: informal and formal mentorships.

In an informal mentorship, a relationship gets formed between two individuals who are already familiar with each other, and there’s no process to make this official.

For example, a young student might email a more experienced person for advice, and she gets a reply back. Over time, the experienced person becomes invested in the young mentee’s life and starts offering help on relevant issues even when it isn’t expected.

This is a perfect scenario. More often than not, informal mentorship can be quite hard to form, because it involves active engagement from the mentor and the mentee. Without setting commitments, mentorships tend to fail.

Formal mentorships happen when there are commitments that set and define this relationship. In this case, mentors offer their services on a public platform, often for a small payment. This is the first way to keep mentees accountable. Otherwise, mentees can often sign up for mentorship and never actually end up reaching their goals or talking to their mentors.

The mentorship is formed and clear from Day 1. The services are laid out and it’s often possible to switch between multiple mentors (MentorCruise does this with a 7-day risk-free trial!).

This way, it’s possible to get mentorship, grow and succeed quicker, even if it involves more commitment from both sides.

Meaning and definition of mentee

OED defines a mentee as: “A person who is advised, trained, or counselled by a mentor.” Mentees are individuals who are following the expert guidance of mentors through an established mentorship.

Depending on the industry, mentees are also called as disciples, protégés, or even mentoree (yes, the last one’s real).

Mentees are in the pursuit of self-improvement

Whatever term you may prefer to use, a mentee wants to become better in some aspect of their lives, and it’s a title that doesn’t necessarily depend on status or professional seniority.

For example, a founder may need a startup mentor because they need some help in finding solutions to certain growth pains. Or it may be someone who can’t decide on a career path and needs some counselling from someone who’s switched careers.

To be a good mentee means to trust and listen to the mentor’s advice, and to put in the hard work necessary to succeed. On MentorCruise, mentors can set assignments and weekly activities to finish. It’s up to the mentees to stay accountable and finish them within the deadline.

Mentorship is a two-way street

There are several benefits when it comes to becoming either a mentor or a mentee and pursuing a meaningful mentorship, in which both parties are committed to each other.

Mentors will be able to shape and influence the ideas of those that might succeed them in one way or another. Mentees will get expert guidance and be able to expand their professional circle.

If you’re either a mentor who wants to offer their help or a mentee who needs expert guidance on specific issues, join a thriving mentorship community at MentorCruise, with members who are keen to see others succeed. Just have a look at testimonials made by our mentees on how their lives have positively impacted by mentorship.

The future of personal coaching and mentorship

How I left my job during the COVID crisis and …